Remdesivir (brand name: Veklury®), which was developed by Gilead Sciences (U.S.) for treatment of Ebola virus disease, is a prodrug having antiviral activity against singlestrand RNA viruses. It is known to be partly metabolized to activated GS-441524, the main metabolite of remdesivir, in vivo1). In Application News C218, we introduced an robust, highly-sensitive simultaneous measurement method using LC/MS/MS with manual pretreatment. Meanwhile, manual pretreatment of plasma samples requires a certain level of workload. This report introduces a method of simultaneously analyzing remdesivir and its metabolite using the automated sample preparation LC/MS/MS system that can reduce variation between procedures, mix-ups of the samples, and risk of exposure to the samples (Fig. 1).

Analysis of Remdesivir in plasma with Fully Automated Pretreatment 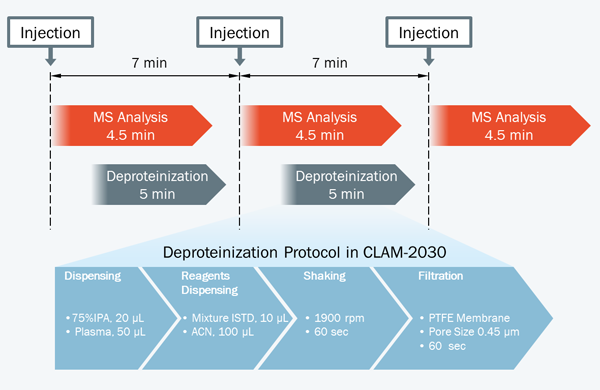 For analysis of low-molecular compounds in plasma using LCMSTM, it is common to use supernatant collected following deproteinization by adding an organic solvent. With the fully automated sample preparation LC/MS/MS system, these preparatory steps are done automatically just by placing a blood collection tube in the system after plasma separation (Fig. 2). Pretreatment of the next sample can also be performed in parallel with LC/MS/MS analysis, which can greatly reduce the time required to analyze each sample. This analysiswas performed in a per-sample cycle time of seven minutes from plasma pretreatment to the simultaneous analysis of remdesivir and itsmetabolite using LC/MS/MS.

Analysis Conditions and Pretreatment of Samples 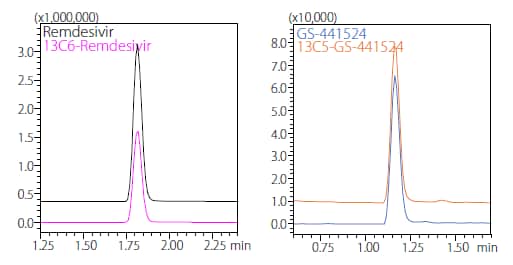 Calibration curves prepared using the fully automated sample preparation LC/MS/MS are shown in Table 3. Good linearity was obtained in the set calibration range. The precision (reproducibility) of remdesivir and GS-441524 in the entire concentration range, including the quantitative lower limit, was %RSD 0.5 %－2.9 % and %RSD 2.4 %－4.9 %, respectively. Similarly, the accuracy of remdesivir and GS- 441524 was 87.8 %－108 % and 94.5 %－105 %, respectively, indicating that the accuracy of both was within 100 ± 15%.