This section describes examples of the pickup of various cells. Each process can be implemented by the CELL PICKER unit, but it is simpler if the system is equipped with AUTO CHANGER.

CELL PICKER can be used in the process of acquiring adherent cells. This section introduces an example of picking an HEK293 cell colony. HEK cells were seeded into a 10 cm dish with 1.8 × 104 cells and cultivated for 13 days. Using CELL PICKER equipped with AUTO CHANGER, picking was performed to ensure one colony per well on a 24-well plate. After the picking process, it was confirmed that the cells proliferated without problems.

Schematic of the Processing Sequence

Images before and after Collection, acquired with the CELL PICKER automatic Image Capture Function

Pick Up an iPS Cell Strain

Picking up an iPS cell strain colony (strain 1231A3) maintained in culture is implemented with CELL PICKER. The cells were cultivated for 6 days after the cell pickup process. They were then immobilized and immunostaining was performed.
Expression of the undifferentiated markers Oct3/4 and Tra-1-60 was conrmed. In this way, the iPS cell colony picked up using CELL PICKER was maintained in an undifferentiated state and could evidently be cultured continuously.

About 30 spheroids per well were prepared to a 6-well plate. CELL PICKER equipped with AUTO CHANGER was used for cell picking to ensure one cell per well on a 96-well plate. The 96-well seeding plate was coated with a 0.1 % gelatin solution and a 100 μL/well culture medium was dispensed beforehand. 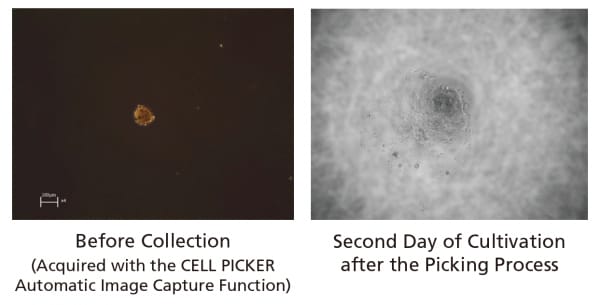