As a key component that determines "umami" (flavor or taste) in foods, organic acids rival amino acids and sugars as one of the most commonly analyzed substances. This page discusses methods for analyzing organic acids using HPLC.

The three main separation modes for organic acids are anion exchange, ion exclusion, and reversed-phase. Characteristics of each of these modes are described briefly below.

Ion Exclusion Mode
This is the most commonly used mode for organic acid analysis. It uses an H (hydrogen) type cation exchange polymer for the packing material and organic acids are separated by the difference in sizes of Donnan exclusion between the stationary phase (with H-type ion exchange groups) and the mobile phase.
In this mode, strong acids are subject to a strong electrostatic exclusion caused by the negative charge of the stationary phase, which prevents them from penetrating the pores in the packing material. Meanwhile, for weak acids, such as organic acids, the degree they can penetrate the pores is determined by the size of the charge (think of it as pKa), which results in differences in elution time (separation). In the example shown below to the right, acids with large negative charges (small pKa), such as citric and lactic acids, are subject to a larger electrostatic exclusion effect than acids such as acetic acid and, therefore, are eluted more quickly. Consequently, in principle, organic acids elute in order of pKa size, starting with the lowest pKa values, and finish eluting by the time neutral substances start eluting (position for elements that fully penetrated the pores).

However, in actuality, a hydrophobic interaction also occurs with some of the packing substrate (styrene-divinylbenzene), which can delay the elution of hydrophobic organic acids in particular. For example, valeric acid elutes much later than acetic acid even though there is little difference in their pKa values. This is because valeric acid is retained more strongly due to a hydrophobic interaction with the substrate material.

In this way, a combination of three factors - electrostatic exclusion due to negatively-charged stationary phase, hydrophobic interaction with the stationary phase matrix, and penetration into stationary phase pores, determine elution times. This mode is widely used because it is a simple method that requires minimal adjustment of mobile phase parameters.

Reversed-Phase Mode
This mode offers the widest applicability for HPLC, but it is not very widely used for analyzing organic acids. That is because organic acids are hydrophilic, which can often prevent adequate retention or selectivity. However, commercial reversed-phase columns that can sufficiently retain even highly-hydrophilic substances have recently become available on the market. 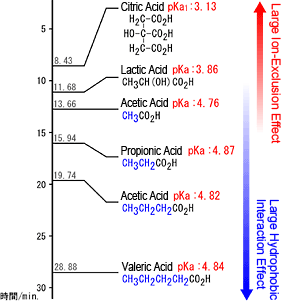 Example of pKa Values and Elution Times of Organic Acids

Note: pKa values were obtained from Seikagaku Deta Bukku (Handbook of Biochemistry) (1979) and Kagaku Binran Kiso-Hen (Handbook of General Chemistry), 2nd Ed. (1975). A comparison of various references indicated a difference of up to 0.3, but these values were close to those in references dated since 2000, such as the Merck Index, academic resources on chemistry in the United States, chemical dictionaries, and biochemical dictionaries. Therefore, these old references with respective documented data were used.

The simplest detection method, direct UV detection, detects the absorption of the carboxyl group in the 200 to 210 nm range. However, there are many organic substances with absorption in that wavelength range, which can result in significant interference from contaminants and makes it difficult to quantify components accurately unless the sample is very pure. Refractive index detectors can also be used, but in addition to poorer selectivity, they also have a sensitivity problem. Direct detection using an electroconductivity detector is another method, but it requires reducing the background electroconductivity of the mobile phase.

Typically, an acidic mobile phase is used in the ion exclusion mode, which is widely used for organic acid analysis. This means dissociation is inhibited for weak acids such as organic acids. Furthermore, since background electroconductivity is high, using an electroconductivity detector under those conditions will not provide adequate sensitivity. Therefore, in this pH buffering method, a pH buffer is continuously added to the column effluent to adjust the pH close to neutral to promote dissociation of organic acids and reduce background noise. The effluent then goes to an electroconductivity detector can detect organic acids with high sensitivity and selectivity.
The figure to the right shows an example of the relationship between eluent pH and dissociation level for acetic acid. At the pH level inside the column (about 3), there is almost no acetic acid dissociation. This results in weak ion exclusion in the column, which enables good separation from other organic acids. In contrast, the pH is neutral at the detector inlet, so almost all the acetic acid has dissociated. This shows that promoting dissociation using a pH buffer reagent in this manner enables detection with high sensitivity.
In other words, this method "kills two birds with one stone" by reducing the mobile phase background level, while also increasing sensitivity by promoting dissociation of the organic acid. 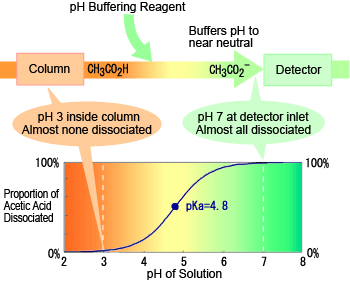 Status of Organic Acid in pH Buffering Method Almost no dissociation during separation in column, but almost fully dissociated when detected

The pH buffering method not only enables detecting organic acids with good sensitivity and selectively, it also provides calibration curves with a broad linear range as well. Therefore, it is effective for analyzing a wide range of sample concentrations. Consequently, it is used in Shimadzu's Organic Acid Analysis System.
The example on the right is from analyzing soy sauce. Using this system allows analyzing organic acids with good precision, but without interference from contaminants, even for samples such as soy sauce. (Yt, Wk)