An ODS column is filled with a packing of octadecylsilyl groups (ODS groups or C18 groups) chemically bonded to a silica gel carrier. ODS columns are used for reverse-phase chromatography. ODS columns find a wide range of applications due to their high theoretical plate number and rapid equilibration. Their low cost makes them the most widely used columns for HPLC.

However, a variety of problems may arise while using these columns. Typical causes and symptoms are introduced below. The subsequent explanations cover the rinse methods to remove the adsorbed components.

Typical Problems with ODS Columns
* These are the major causes and symptoms. Other issues may exist.

When considering the rinse method, it is important to think about the adsorption forces acting on the components. First, we will review what we know about the surface of the ODS packing.

Hydroxyl groups are originally attached to the surface of the silica gel carrier in an Si-OH structure. This is called "silanol." ODS packing is formed by bonding ODS groups to the silanol through chemical reactions. However, as the ODS group is bulky and not highly reactive, a lot of unreacted silanol remains.

As this residual silanol can have a variety of adverse effects* during analysis, the silanol is capped by reactions with trimethylsilyl (TMS) groups, which are not bulky (are highly reactive). This operation is known as "end capping," "trimethylsilylation," or "secondary silylation." However, a small amount of silanol will still remain on the surface and the ODS groups may be gradually removed to create silanol in the ODS column during analysis.

The term "hydrophobic interaction" indicates an affinity between component areas with low polarity and an ODS group with low polarity. It is the retention force used by genuine reverse-phase chromatography. Areas of low polarity include alkyl groups and aromatic rings. At the top of the diagram on the right, a propyl group of the component is attracted to an ODS group.
A low-polarity mobile phase is used to rinse off components retained by this force. If 1/1 methanol/water is used as the mobile phase for analysis, increasing the methanol ratio to 3/1, for example, lowers the polarity of the rinse solution and makes it easier to rinse off components with a high retention force that remain in the column.
The compatibility must be considered when changing the mobile phase. If a buffer solution is used instead of water in the example above, salts may precipitate out if the organic solvent ratio is suddenly increased. If a buffer solution/organic solvent mixture is used as the mobile phase for analysis, the column and flow line must first be flushed with a water/organic solvent mixture * of the same ratio before the organic solvent ratio is increased.
During rinsing, monitor with the detector to determine whether the baseline is stabilized. 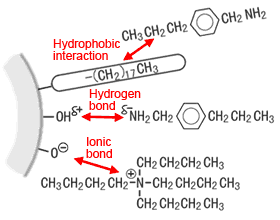 Interactions at the ODS packing surface

(3) Rinsing off components adsorbed by hydrogen bonding or ionic bonding

As discussed in (1) above, a small amount of silanol remains on the packing surface. The hydrogen in silanol attracts electrons to the oxygen to create a somewhat positive static electrical charge. Therefore, the hydrogen has the property of forming a hydrogen bond with the lone pair (somewhat negative static charge) on the nitrogen in the component. (Middle row of the diagram above right) In a mildly acidic or neutral mobile phase, this hydrogen bonding adsorbs basic components and cause tailing. (Silanol forms ionic bonds at a higher pH.) Strongly adsorbed basic components cannot be rinsed off by organic solvents.
In this case, an acidic rinse solution must be used to restrict the hydrogen bonding by coordinating a hydrogen ion with the lone pair on the nitrogen (protonation).
R-NH2 → R-NH3+
Make an acidic rinse solution by adding approximately 0.1 % phosphoric acid or acetic acid.

Generally, the components strongly retained inside the column are thought to include such basic components. This is a reason that the addition of acid is beneficial for rinsing at (2) above. Do not flush with water if basic components remain in the column (including when basic compounds are used as the ion-pair reagent). Flushing with water increases the pH around the adsorbed components, making the silica gel easy to dissolve. Adding acid helps avoid this problem.

However, some components are difficult to remove simply by making the mobile phase acidic. This is the case with cations with a large ion radius, such as tetrabutylammonium.

In this case, ionic bonding is thought to occur with the negative charge of dissociated silanol. (Top of diagram)
Ionic bonding becomes stronger as the ion radius increases. The diagram below shows the case where a terminal amino group is positively charged under acidic conditions. Due to the high charge density, multiple levels of hydration occur, which makes it difficult for anions to approach. However, as hydration is weak for ammonium ions surrounded by bulky alkyl groups, anions can approach more easily.

To weaken the ionic bonding, use an acidic rinse solution containing large-radius anions* as ion pairs. The acidity suppresses the dissociation of silanol.
* For example, add approximately 0.1 M sodium perchlorate. Although sodium perchlorate is an inorganic salt, it has the properties of dissolving in 100 % methanol or acetonitrile and not readily precipitating out. As the perchlorate ions easily form ion pairs in the mobile phase, it can also be used for ion pair chromatography. (However, this is a dangerous reagent. Do not heat it or put it near a naked flame. Dilute the waste liquid to a neutral state and dispose of it through a licensed waste disposal contractor.)

When silanol dissociates, it carries a negative charge. When bonded to metal ions, it promotes adsorption of coordination compounds and acidic compounds. To rinse off metal ions, a competing ionic species or a metal masking agent is added to the rinse solution. Also, as it is desirable to restrict the dissociation of silanol, lowering the pH of the mobile phase / rinse solution is effective.

Furthermore, making the solution acidic weakens the coordination of coordination compounds and restricts the carboxyl group dissociation in acidic compounds. However, as silica gel is most stable around pH 4, the use of extremely acidic solutions over a long period is prohibited. Ideally, use a small quantity of phosphoric acid or acetic acid.

However, the optimal rinse method differs for each analysis. When determining the rinse method, always keep in mind what the sample contains and what mobile phase is used.
The restrictions on use may differ, even if ODS columns use the same silica gel carrier. Carefully read the instruction manual.