Shimadzu has been manufacturing balances for over 100 years. During that period, the most revolutionary event was electrification and the advent of the electronic balance. Due to their easy operation and fast measurement, their use has spread very quickly.
However, there are also hidden pitfalls to their ease-of-operation and convenience that could result in committing major mistakes.
Therefore, this page discusses the key points for ensuring electronic balances are used correctly and more accurate and reliable measurements are obtained. The following describes the types of error, how each type occurs, and measures to minimize error. In addition, we will also give some recommendations for daily inspections (including adjusting sensitivity).

The quickest way to understand the principle of how electronic balances work, is to first understand how they are constructed. There are two basic types of electronic balance designs.
1. Electromagnetic balancing type
2. Electrical resistance wire type (load cell type)
These are based on completely different principles, but what they both have in common is that neither directly measures mass. They measure the force that acts downward on the pan. This force is converted to an electrical signal and displayed on a digital display.

1. Sensitivity Error
This indicates a difference between the value measured by the balance and the correct value. Normally, this is expressed in terms of the deviation at measurement points near the balance capacity (maximum mass measurable). As an extreme example for a balance with a 200 gram capacity, if a 200 g weight is placed on the pan but the balance displays a value of 160 g, the sensitivity error at 200 g is -40 g. This indicates that the deviation is distributed proportionally as error over the entire measurement range. For example, a measurement at 100 g is half the weight of 200 g, so it would include half the error of 200 g, or -20 g.
Sensitivity error occurs based on how accurately calculations are performed when force is converted to mass, as described above in How Electronic Balances Work. The method used to convert force to mass is always described in instruction manuals and is referred to as sensitivity adjustment, calibration, or span adjustment. Placing the balance in different locations can results in variations in gravitational acceleration or variations in room temperature that can affect conversion. Sensitivity error can increase or decrease depending on how users adjust sensitivity. 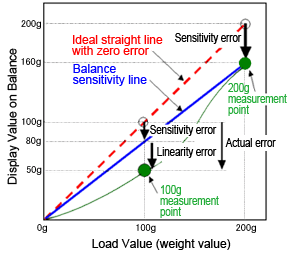 3. Repeatability
Repeatability refers to the degree to which the same measurement value is obtained when repeatedly measuring the same thing and is an indication of precision level. It expresses the variability of measurement values in terms of standard deviation or band width.
Repeatability depends on the status of the balance itself and original performance level, but it also depends on how it is used (such as the containers used for measurements) and the environment (such as effects from air flow or static electricity).

4. Eccentric Error
This error occurs due to where the item is placed on the pan. In the case of round pans, this is expressed as the difference in measurement values obtained when an item is placed half a radius away from the center, in 45-degree directions (front left, front right, rear right, and rear left), compared to the measurement at the center. Eccentric error depends on the status of the balance itself and its original performance, but can be significantly reduced by being careful to place loads in the pan center.

Causes and Corrective Measures for Error

1. Gravitational Acceleration
The biggest factor causing sensitivity error is gravitational acceleration.
Consider the following example. If a balance with sensitivity adjusted perfectly in Tokyo is transported carefully to Kagoshima (about 1000 kilometers southwest of Tokyo) without causing any damage, the measurement value for a 1 kg weight would change as indicated below.

Gravitational acceleration is not only affected by latitude, but also by altitude as well.
The important point here is not about how much of a sensitivity error occurs for a given movement of the balance, or by a given change in floors of a building, rather the point is that sensitivity should be readjusted whenever the balance is moved, even for short distances.

4. Air Flow
It is easy to imagine how the beam of a mechanical weighing balance could fluctuate when exposed to external air flow. The same thing applies to electronic balances as well. The presence of air flow can cause worse stability and repeatability or other consequences.

1) Air Flows From External Sources
There are many factors in our immediate surroundings that can cause air flow, such as air conditioners and the movement of people, but one factor that is often overlooked is the door to the room. If the door is a swinging type, think of it as fan that not only generates it own wind, but also changes the room air pressure, which disturbs the stability of the air inside the balance as well. These effects can be significantly prevented by taking measures with respect to the facility to prevent exposing the balance to air flow and having all personnel, including those not involved in using the balance, to cooperate together in being careful. Also, if possible, use a sliding type door.

2) Air Flows Generated Within the Weighing Chamber
If the air inside the weighing chamber convects, the pan and item being measured will be exposed to air flow, which will cause instability.

5. Static Electricity
Static electricity, which appears when the air starts becoming dry, can electrically charge powders, plastic or glass containers to cause the balance display value to be unstable and cause repeatability to become worse. If a problem occurs only when weighing an actual sample, but not when weighing weights, then the cause is likely static electricity.

Static electricity can be discharged to the air and eliminated by humidifying the room, but using an ionizer is also effective. Shimadzu offers STABLO-AP ionizers.

Electronic balance error was discussed above. Hopefully, this will be helpful to those that read it. In addition to the causes mentioned above, there are a variety of factors that can cause errors, such as vibration and the density of the items being measured. Those will be discussed in a future article, as opportunity allows. Next, we will give a brief introduction to daily inspection of balances.

Inspect the following every day or before use, as described below, to confirm with minimal operations that the analytical balance will function properly. To inspect the weighing capacity, place a weight with a known mass on the pan to confirm that the displayed value is within the criteria values (user-specified values). It is also necessary to decide what procedure should be followed if the value exceeds the criteria values, such as whether to readjust the balance until the value is within the criteria values or send the balance out for repairs. In recent years, routine inspections have been increasingly performed at two or three inspection points, typically including one point near the weight where the balance is normally used and one near the weighing capacity. As indicated in Table 1, routine inspections should inspect both performance and the general status of the electronic balance, such as checking for contamination on the pan or in the weighing chamber and checking that the digital display functions properly. Table 2 shows an example of a routine inspection results record.

(Fill out before starting operations each day. In particular, be sure to indicate the number of the weight used.)

(5) Repeatability (For the dual range, inspect both small and large ranges.)

Inspect repeatability according to the following procedure.

(6) Eccentric (Corner Load) Error (For the dual range, inspect only the large range.)

Inspect eccentric (corner load) error according to the following procedure.

(7) Instrumental Error (Linearity) (For the dual range, inspect both small and large ranges.)

Inspect instrumental error (linearity) according to the following procedure.

An Interesting Mechanism - The Unibloc

In the introduction of this discussion "electromagnetic balance method" was mentioned as one type of electronic balance. The electromagnetic balance method is widely used in high precision electronic balances. Typically, the mechanical portion of balances that receive loads is the heart of the system, which is made from a complicated combination of many parts. However, Shimadzu has succeeded in integrating that mechanical assembly into a single aluminum part, machined from a single block of aluminum. Therefore, we named this unique part that packs so much sophisticated technology into a single part "Unibloc." A brief overview is provided below.
To put it simply, the structure of electromagnetic type balances is based on a lever. The pan with the item being measured is attached to one end of the lever and a coil that generates an electromagnetic force is attached to the other end. See the diagram below. However, the actual structure is much more complicated. 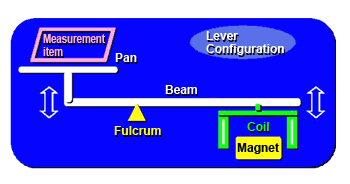 The Unibloc comprises the key parts of this lever mechanism, carved from a single block of aluminum. Furthermore, two stages of levers are carved from the block. 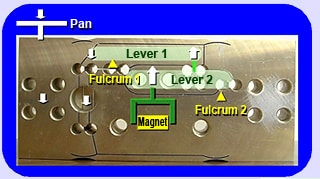