TIC (total ion chromatogram) of GCMS is identified as a kind of GC chromatogram. Comparisons between chromatograms by TIC and by GC detectors are difficult since the results vary depending on the samples. A general explanation is provided below. TCD, FID, FPD, FTD, ECD, and other detectors are used for GC. Features of each detectors are as follows;

TCD:
an detect any compound but sensitivity is poor.

FID:
Is sensitive for compounds containing carbon. Sensitivity is better than TCD. However, sensitivity is not as good as the detectors described below.


TIC is capable of detecting all compounds regardless of the elements involved. Sensitivity can therefore be compared to TCD and FID of GC. In comparison, TIC has about the same sensitivity as FID. The SIM method, with even greater detection sensitivity, is also possible with GCMS. With SIM, sensitivities 10 ~ 100 times the sensitivity of TIC can be obtained.


A detector sensitivity comparison chart is shown below. 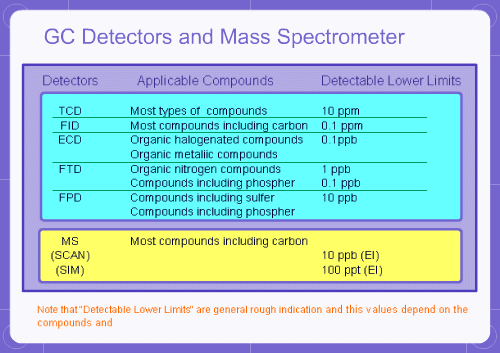