By redefining the ion focusing capability on the UF-Qarray, the LCMS-8060 brings a meaningful impact to quantitative detection and opens new opportunities for scientists to deliver solutions that make a true difference.
The newly developed UF-Qarray ion guide is a groundbreaking technology that increases LC/MS/MS sensitivity by enhancing ion signal intensity and reducing noise. By improving the ion sampling device, the ion guide, and the vacuum efficiency, the LCMS-8060 delivers a new vision of sensitivity and makes a real difference to working better and faster. 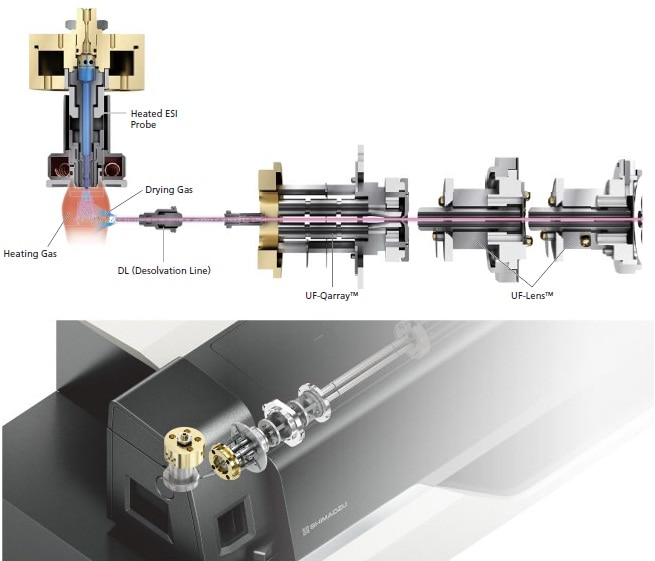 Built on the proven platform of the LCMS-8050, the new patented ion guides developed for the LCMS-8060 greatly improves ion production and collisional focusing without affecting noise.
The ion production, transmission and detection of three pesticides (fenoxaprop-ethyl, clofentezine and triclopyr) results in increased sensitivity compared to previous technologies.

The chromatogram for each pesticide has been magnified to show the noise has not increased with a higher ion production.

Innovations in ion guide technologies not only delivers new limits of MRM sensitivity but has an impact on full-scan sensitivity. 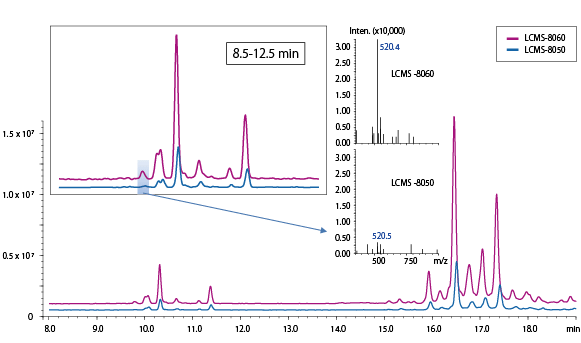 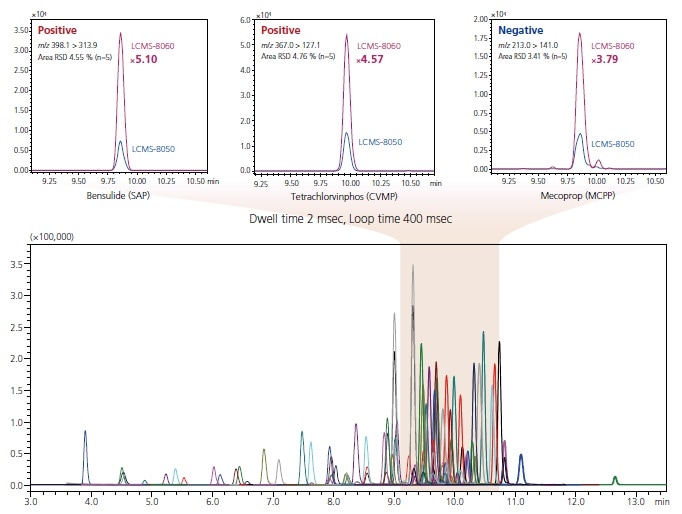 In clinical research, plasma catecholamines and their O-methylated metabolites (metanephrines) are measured as biomarkers for diseases such as hypertension, pheochromocytoma or neuroblastoma.
It is a challenging assay as the low physiological levels of CAs, physicochemical properties, and potential interferences require high sensitivity and specificity.
We developed a SPE-LC/MS/MS assay by using LCMS-8060 to detect catecholamines at ultra-high sensitivity without matrix interferences. As the measurement cycle time was 12 mins including the column re-equilibration the LCMS-8060 assay opens new possibilities for multiplexed sample analysis and higher sample throughput. 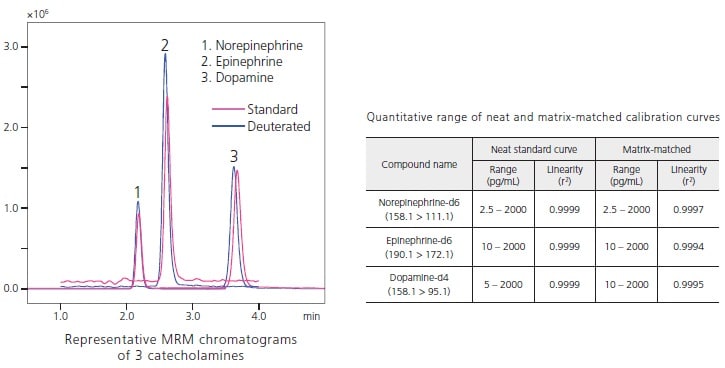 Detection of Norepinephrine, Epinephrine and Dopamine and their deuterated internal standards in plasma

The robustness of the LCMS-8060 and modified ion optics was also assessed by injecting 2400 samples of femto-gram levels of alprazolam spiked into protein-precipitated human plasma extracts over a 6 day period (over 400 samples were injected each day). The RSD of peak area response was 5% over this test period, using a deuterated internal standard (alprazolam-d5) the RSD was 3.5%. As part of the robustness test the vacuum system was vented to model a transient power failure with no effect on signal response or baseline noise level.

MRM chromatograms for the 1st, 1200th and 2400th measurements of alprazolam

As with Shimadzu’s other triple quad systems, maintaining the LCMS-8060 is simple. Replacing the desolvation line (DL) and ESI capillary is quick and easy. Additionally, the design allows users to replace the DL without breaking vacuum, providing greater uptime and usability.