i-Series Plus Addresses a Wealth of Applications

Although it is an integrated LC system, the i-Series Plus supports a wide range of applications according to your choice of detectors. Basic systems come with the choice of a UV-VIS detector or photodiode array (PDA) detector.
You can add to this a fluorescence detector, a differential refractive index detector and a Evaporative Light Scattering Detector, as necessary. The innovative and superior performance of the i-Series Plus supports your application requirements.

The i-Series Plus supports a wide range of HPLC analyses in the pharmaceutical industry, from identification and purity testing at the drug discovery stage to impurity testing and quantitative determination at the manufacturing and quality assurance departments. 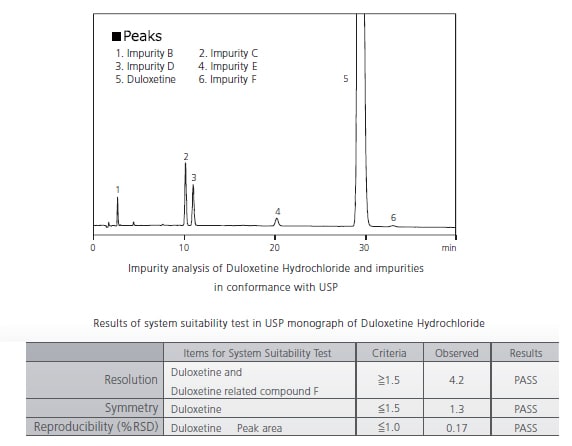 Standard performance features, such as excellent baseline stability, ultra-low carryover performance, and excellent reproducibility of sample injection, ensure stable and validated results in any analysis based on national Pharmacopeia of each country. 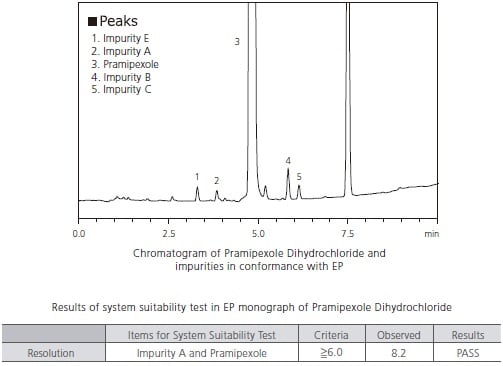 The i-Series Plus supports a wide range of HPLC analyses in the food and beverage industry, such as active ingredient analysis and toxic substance analysis.

Systems with a PDA detector are ideal for the analysis of synthetic pigments. Qualitative analysis with a UV spectrum and sensitive and simultaneous quantitation by wavelength switching are available. By adding an optional tungsten lamp, synthetic pigments and other substances measured in the long-wavelength region can be detected with high sensitivity.

The temperature of the oven can be controlled to as high as 85°C, while still allowing effective analysis, such as that of sugars in ligand exchange mode. Adding the RID-20A differential refractive index detector enables the detection of low light-absorbing compounds such as sugar.

The i-Series Plus supports a wide range of HPLC analyses in the environmental industry, water, atmospheric and soil analysis.

The i-Series Plus supports a wide range of HPLC analyses in the chemical industry, from small molecules to polymers. 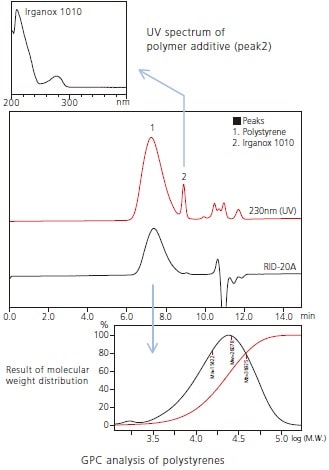 Gel permeation chromatography (GPC) for the analysis of hydrophobic polymers has traditionally been conducted using a differential refractive index detector.
However, when UV-absorbing trace-level additives are present along with the principal synthetic polymer component, these are sometimes analyzed using a UV detector or photodiode array detector (PDA) for highsensitivity detection. However, a combination of a differential refractive index detector and UV detector makes it possible to conduct simultaneous analysis of the principle component along with any trace-level additives, and further, permits calculation of the molecular weight distribution of the polymer, confirmation of the UV spectra of minor components, and quantitation based on the calibration curve and qualitative analysis results.
The Prominence-i Plus integrated high-performance liquid chromatograph supports connection with the RID-20A differential refractive index detector. In addition, as the column oven can house up to three 30 cm columns used for GPC analysis, applications that require a long column are also supported.

Various types of additives, including plasticizers, antioxidants, lubricants, vulcanization accelerators and flame retardants, are generally added to polymers. This content presents an analysis of Irganox 1010, a typical hindered phenolic antioxidant which is added in small amounts to polystyrene (PS).

As shown in Fig. 1, the Irganox 1010 peak was detected directly after PS, which eluted at about 7.5 minutes. The additive peak, which was barely detected by the differential refractive index detector, was detected with high sensitivity by the PDA detector by optimizing the detection wavelength, thereby permitting quantitation. Also, as shown in Fig. 2, qualitative analysis of Irganox 1010 is possible using the UV spectrum obtained using the PDA detector. 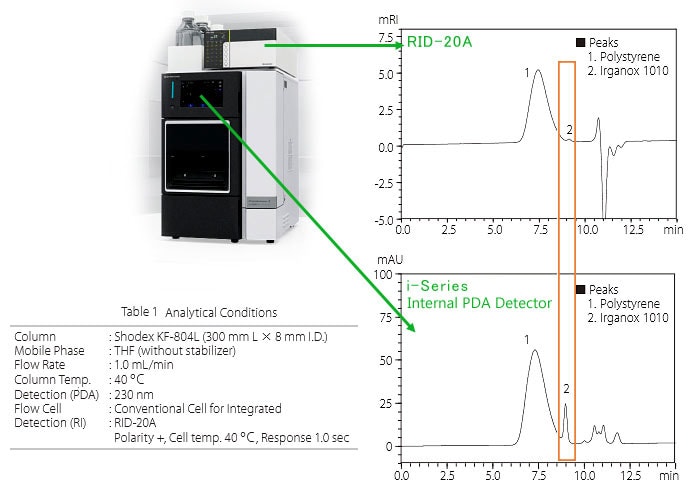 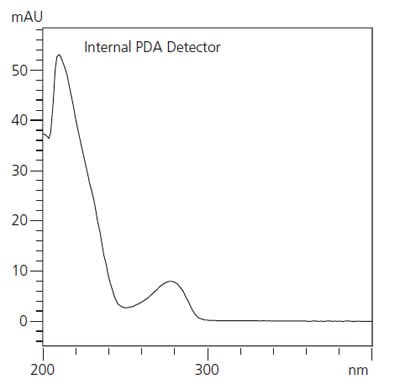 Quantitation and qualitative analysis of the additive -containing Polystyrene 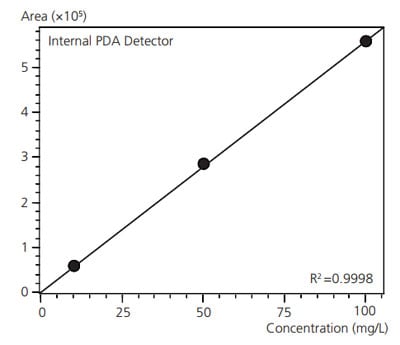 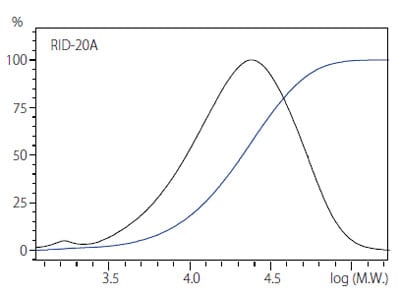 Analysis of Sugars in Juice

The new i-Series Plus integrated high-performance liquid chromatograph can be connected to the RID-10A differential refractive index detector. Since the column oven can accommodate a 30-cm column for use in sugar analysis (ligand exchange column), and the temperature can be controlled up to 85 °C, it therefore supports applications that require a long column and high column temperature.
Here, we introduce an example of sugar analysis in juices using the Prominence-i with the RID-10A.

Fig. 1 shows the results of analysis of a standard mixture of four sugars (maltotriose, sucrose, glucose, fructose) using a 10 μL injection (each at 20 g/L). For the analytical column, we used the Shim-pack SCR-101N, a specialized sugar-analysis column that supports both the gel filtration and ligand exchange modes. 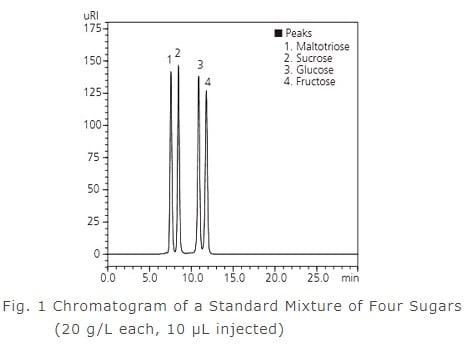 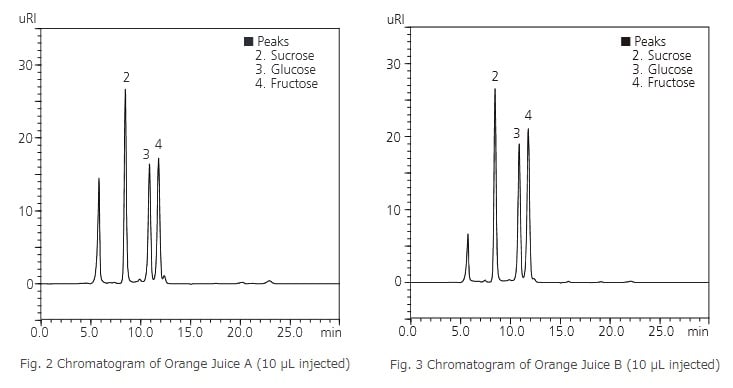 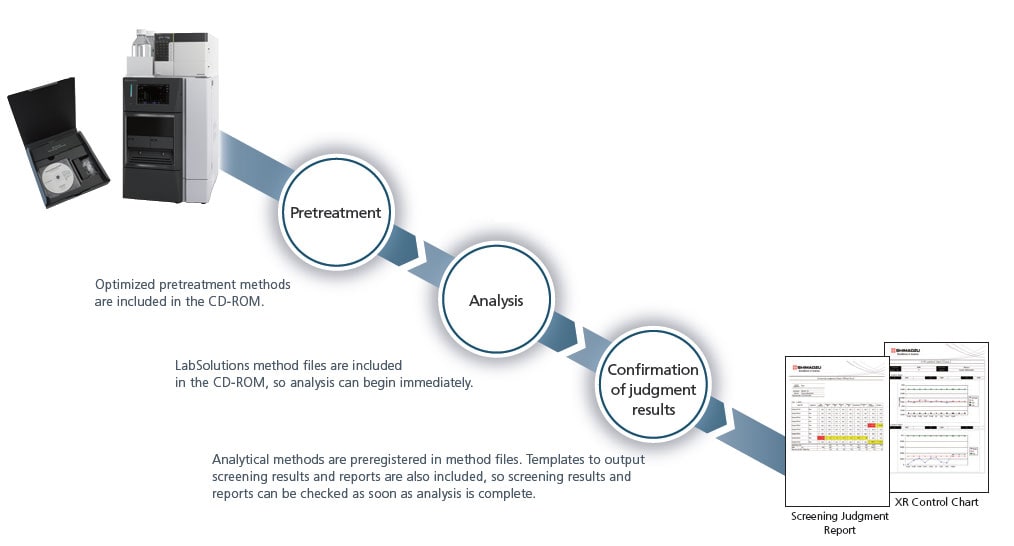 i-Series Plus as a Front-End for LCMS

Mass spectrometers are used in a variety of sectors, from pharmaceuticals to food. i-Series Plus (LC-2030C LT) features a compact size and the ability to process multiple samples, and combining these strengths with the superior qualitative analytical performance of Shimadzu's single quadrupole LCMS-2020 produces a system that supports powerful quantitative and qualitative analyses. Amino acids are often a target of analysis in the food sector, but are difficult to detect with UV detectors due to their normally poor light-absorbing properties. Mass spectrometers can easily analyze amino acids, so a LCMS system with excellent ease-of-use can be built by combining a detector-less i-Series Plus model with the LCMS-2020. 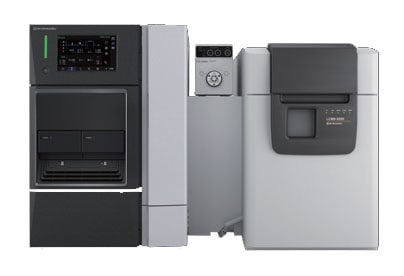 In amino acid analysis via HPLC, a long analysis time is required in order to separate the amino acids. When detecting by mass, however, the analysis time can be shortened while avoiding the impact of impurities. 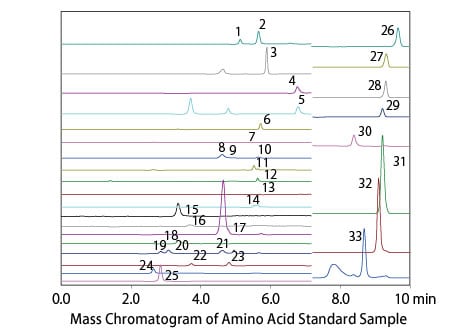 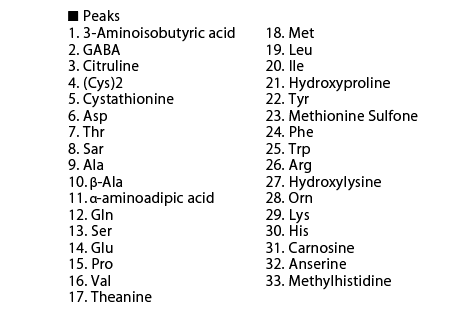 MS Chromatogram for a Standard Sample of 39 Amino Acids

● Analysis of Sweeteners Using the LCMS-2020

Low-calories sweeteners are now widely used in food products. Sweeteners exhibit distinct flavors different from sucrose and glucose, so flavors are adjusted by combining multiple sweeteners or other methods. This publication shows the results of an analysis of carbonated beverages and a mixed standard solution of synthetic sweeteners utilizing the i-Series Plus and the LCMS-2020. Sucralose is known for its poor light absorption, which makes it a difficult component to detect using a UV detector. In contrast, the LCMS-2020 can easily analyze these sweeteners. 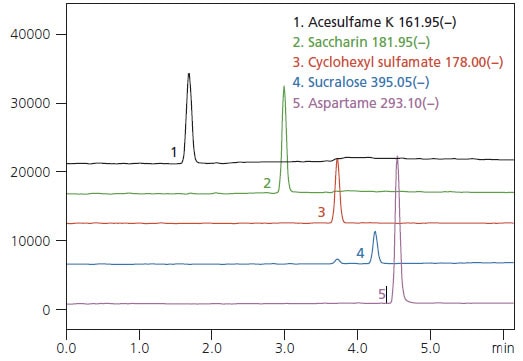