Recording speed of 10 million frames/second, the highest in its class

In addition to a special format, the recorded images can be saved in common formats such as AVI, BMP, JPEG, and TIFF. 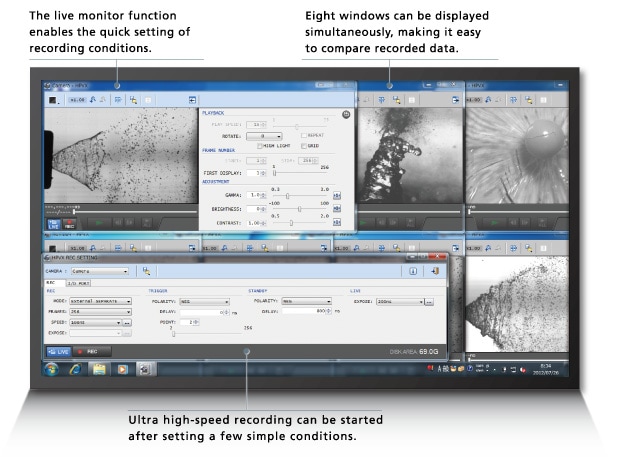 3-D strain analysis of CFRP thin plate
The deformation behavior of a CFRP thin plate colliding with a steel ball emitted by a gas gun at supersonic speed h as been captured by two high-speed cameras. By using 3D-DIC software, it is possible to analyze a temporal change of the strain distribution in the direction perpendicular to the thin plate.
(Provided by the Tanabe Laboratory at Nagoya University) 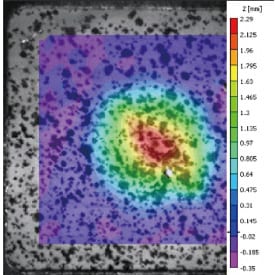 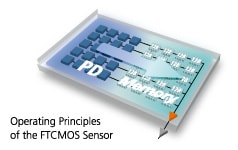 For typical high-speed video cameras, image storage memories are located outside of the image sensor. Because the number of signal output taps are overwhelmingly small compared to the number of pixels, the transfer of the video signals from the pixels to the memories must be a sequentially serial process; therefore, ultra high-speed recording of more than 1 million frames per second could not be realized. In contrast, Shimadzu's burst image sensor has the same number of built-in memories as number of frames recorded. Furthermore, a pixel and memories are connected by wire in a one-to-one manner in order to completely parallel transfer the video signal from the pixels to the memories. This makes it possible to realize ultra high-speed recording at 10 million frames per second. In addition, since it not limited to the number of signal output taps as with conventional serial transfer system, high-resolution recording at ultra high speed is available.

Conventional burst image sensors are based on CCD technology, in which the memory is positioned adjacent to the pixels. As a result, there are problems with decreased image quality due to signal leakage from pixels to memory. Accordingly, the Shimadzu FTCMOS burst image sensor adopts CMOS technology, in which the pixels and memory are spatially separated to achieve high image quality with no signal leaks.
In addition, with the FTCMOS2, light sensitivity is six times better than with FTCMOS, thanks to the adoption of a new CMOS process. 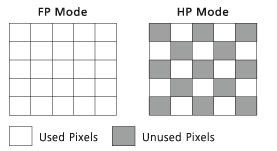 * When images are displayed using software, and when saving image data, the pixels that are not used in HP mode are supplemented by the software, so the equivalent of 100,000 pixels is displayed or saved.