Measures the concentration of 100nm to 10µm aggregates of biopharmaceuticals

The Aggregates Sizer is able to measure aggregates of a wide range of particles sizes, from 7 nm to 800 μm, as part of a particle size distribution (displayed with particle quantities totaling 100 %). Furthermore, aggregate concentrations in the SVP (sub-visible particle) range, from 100 nm to 10 μm, can be evaluated quantitatively (in terms of μg/mL).

Quantitatively evaluates aggregation processes at intervals as short as one second

Changes (sizes and quantities) in aggregates can be confirmed quantitatively as a concentration (unit: μg/mL) at intervals as short as one second. This allows observing the status at various intermediate stages, not just at two stages, before and after such changes, which allows evaluating rates of change. Using a batch cell (5 mL sample capacity), aggregation processes can be observed as samples are mechanically stimulated.

Why can particle size distribution as a concentration (μg/mL) be measured using the laser diffraction method?

Previously, normalized particle size distribution could not be obtained as a concentration.

The difference between sample A and sample B cannot be evaluated by particle size analysis using a normalized particle amount whose summation is 100%.
By referring to scattered light intensity, the particle amount becomes proportional to concentration but does not have a unit. Via calibration using a PSL (polystyrene latex) standard particle, we can obtain particle size distribution as a concentration (Unit: μg/mL).

Principle of the Laser Diffraction Method by Violet Laser

The light intensity distribution pattern varies little relative to the particle size distribution when the particle size drops to several tens of nanometers. This is the reason for the minimum limit of detection of the laser diffraction method. A violet laser creates clearer differences in the light intensity distribution pattern at ultra-small particle sizes than a red laser. Consequently, a violet laser is used to enhance the measurement performance for ultrafine particles of the order of several tens of nanometers.

Measurement is performed on particle groups

The laser beam emitted from the light source (semiconductor laser) is converted into a thick beam with a collimator, which is directed at the particle group. The scattered light emitted from the group in a forward direction at up to a 60° angle is concentrated with a lens, and concentric scattering images are formed at a detecting plane positioned at a distance equal to the focal length. This is detected with the wing sensor in which light-receiving elements are arranged concentrically. The scattered light emitted to the side and backwards is detected with side and back-scattered light sensors. The light intensity distribution data can be obtained by detecting scattered light data.

By using the “WingSALD bio” software for Aggregates Sizer, the vertical axis of the graph can become a concentration (unit: μg/mL and particle amount can be evaluated quantitatively).

The following table shows measurement results using a PSL standard particle of 1 μm, changing the concentration conditions (0.5 ppm, 1 ppm, 2.5 ppm and 5 ppm) to confirm the repeatability. CV values for all conditions are less than 3%.

The intensity of scattered light from large particles is high and changes frequently within the forward small angle. In contract, the intensity of scattered light from small particles is very low and changes slowly within the large angle.
Aggregates Sizer uses Wing sensor II, which consists of 78 concentric sensor elements, and the area of the respective element can increase logarithmically from center to outer. Therefore, Wing sensor II can effectively detect the scattered light intensity pattern of a wide particle size range, enabling high resolution. 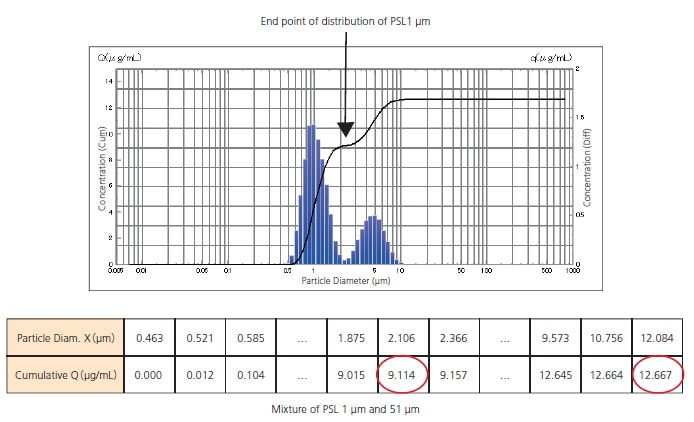 The Aggregates Sizer aggregation analysis system for biopharmaceuticals now includes a temperature controlled cell unit. Consequently, aggregates can be measured without temperature variations affecting the formation of aggregates, even for mechanical stress testing, which takes longer than regular measurements due to the batch cell stirring function involved. In addition, the micro cell size was reduced from 400 μL to 125 μL so that smaller sample quantities can be measured.

With the continuous measurement function, up to 200 data points can be measured successively (changes over time) at intervals as short as 30 seconds. During measurements, the system can display a real-time particle size distribution from current measurement data, in addition to the elapsed time and remaining time, and start processing the data measured thus far. This results in a quicker understanding of the aggregate formation process.

The system includes a refrigerated/heated circulator that can be used to keep the sample at a constant computer-controlled temperature within the 20 to 42°C range (with a temperature accuracy of ±1°C).
Consequently, aggregates can be evaluated under constant-temperature conditions, so that aggregate formation is not affected by any temperature changes. 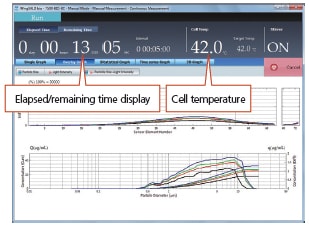 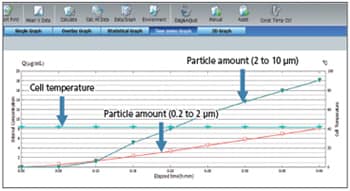 The amount of sample required was reduced from 400 μL to a low 125 μL by eliminating as much of the sample that does not affect measurements as possible. In addition, the micro cell material was completely changed to quartz glass, so that the cells can be cleaned chemically (alkaline) or ultrasonically.

In addition to the mass concentration values displayed on previous models (μg/mL),concentration can now also be displayed in terms of number of aggregates per milliliter (count/mL).