These figures show phthalocyanine crystals, which are commonly used in organic light-emitting displays, and in dye-sensitized solar cells. The four-leaf structure surrounding the metal atom at the center of the molecule can be clearly observed.

Observations were made of polydiacetylene crystal surfaces, cleaved in air. If the terrace observed in the wide-area image (in the figure at left) is enlarged, individual PTS (para-toluenesulfonate) side chains lined up at 0.5 nm intervals can be observed along the main diacetylene chain, running at 0.75 nm intervals parallel to the b-axis. The fact that an atomic defect is visible is evidence that the image is of an actual space, not a FFT image of periodicity.

This illustrates the observation of epitaxially-grown Na2MgCl4 crystals on a single NaCl crystal surface in a mixed solution.
Because the crystalline structure can be observed, this technique can be used to identify the structure of mixed samples.

This is an atomic-resolution observation of surface structure in a liquid medium. Defects in the calcite surface are evident in the figure at left.

* All data on this page was obtained using the petri dish type solution cell (option).

What are Hydration and Solvation?

It is known that liquids in contact with solids become stratified, a phenomenon called solvation, or in the case of water, hydration. It is believed that this characteristic structure, which is different from that of a bulk liquid, is the main influence on the various roles played by solid-liquid interfaces, such as dissolution, chemical reactions, charge transfers, wetting, lubrication, and heat transfer in the liquid phase. However, because this layer is extremely thin, the hydration/solvation structure is not easy to measure experimentally. In particular, non-uniform structures in the in-plane direction of the surface have not yet been detected.

When measuring hydration/solvation, the variation in the force on the cantilever is very small. However, by using an ultra-high sensitivity FM method, this can now be measured for the first time.
Such methods enable not only the measurement of hydration/solvation structures in the Z-X direction, but also the analysis of 3D Z-XY structures. HR-SPM capabilities have now advanced from mere surface observations to measurements of the structure of solid-liquid interfaces. 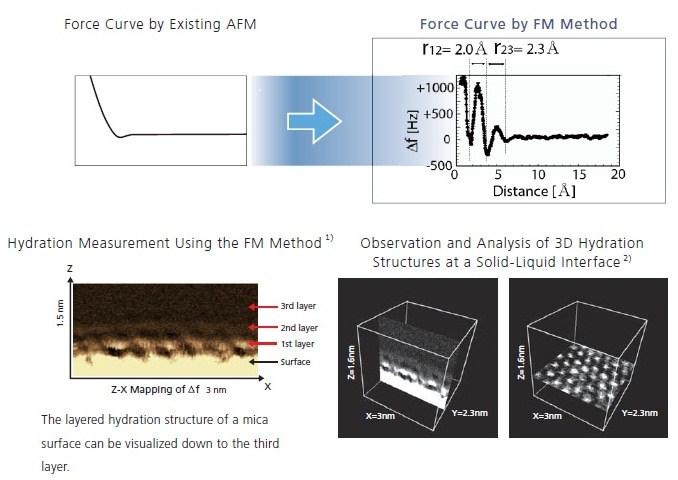 The molecular film of 1-decanol over graphite was observed (figure at left). The joining of two molecules of decanol and molecular film formation can be observed. The cross-section structure of decanol liquid contact with an adsorbed molecular layer was measured (figure at right). It was found that the decanol organized in a layer structure and there existed inhomogeneous distribution in an in-plane direction.

A Saturated Aqueous Solution in Contact with p-nitroaniline Crystals 6)

In the Z-X in measurements on the left, the convex area is the position of the benzene ring, and the concave area is the position of the hydrophilic functional group. From the force curves at each position (Z-Δfcurves), it is evident that there is strong hydration due to the localization of water molecules in the concave area representing the hydrophilic group. This data suggests that the structure is stabilized by hydrogen bonding of the water molecules with the polar groups, as shown by the model in the figure at the bottom. 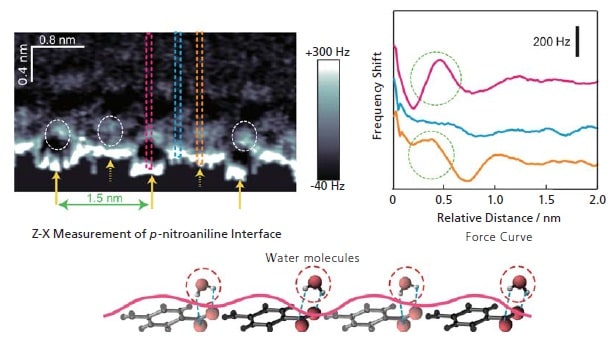 * All data on this page was obtained using the petri dish type solution cell (option).