Gratings with grooves that have a sawtooth profile (blazed gratings) exhibit a high diffraction efficiency for certain orders and wavelengths.
In Fig. 5, light is directed at a reflective grating at angle α and light of wavelength λ is diffracted at angle β. Here, α and β are the angles made with the normal to the grating and counterclockwise direction is taken as positive. Grating equation (2)' can be updated as the following relationship: 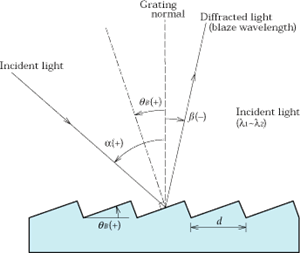 When the relationship between the incident light and the mth-order diffracted light describes mirror reflection with respect to the facet surface of the grooves, most of the energy is concentrated into the mth-order diffracted light. The facet angle of the grooves at this point is called the "blaze angle" and, represented by θB, satisfies the following: 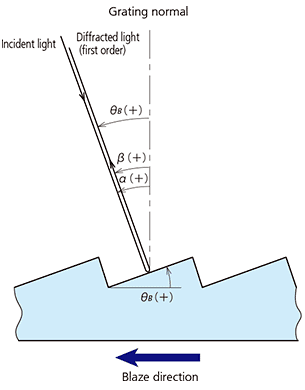 The corresponding wavelength is called the "blaze wavelength" and is represented by λB. Combining equations (8) and (9) gives the following:

It can be seen from this equation that the blaze wavelength varies with the blaze angle θB and the incident angle α (i.e., the usage method). In gerneral, the wavelength (λB(Litt)) where first-order diffracted light returns along the same path as the incident light is used to represent the blaze characteristics of gratings. In this case, α = β = θB then equation (8) gives the following:

It can be seen from this equation that, when not using the Littrow configuration, the blaze wavelength λB is shorter than λB(Litt).
For incident angle α, the relationship between λB(Litt) and λB is given by the following:

For example, for a groove density N of 600 grooves/mm and an incident angle α of 60°, in order to obtain first-order light with a wavelength of 300 nm, substiture λB = 300 nm in equation (13) to obtain λB(Litt) = 484 nm. In this case, then, select a grating for which λB(Litt) = 500 nm from the catalog.
The blaze wavelengths given for concave gratings in catalog are the blaze wavelengths for the configuration (mounting) in the optical system used.
The arrows on the gratings indicate the blaze direction and the relationship between the groove profile and this direction is shown in Fig. 6.