Software Platform for Glycan Quantification and Qualification by LCMS-8060/8050

It is reported glycans play an important role in physiology. It is essential in R&D of biopharmaceuticals to figure out the structures, existing ratio and bonding sites of glycans which are connected onto proteins. However, due to its complexities and heterogeneities of glycans, it is not so easy to figure out. So, the demands against new technologies and a dedicated software which supports its workflow are elevated in biopharmaceutical research.
Erexim™ is a groundbreaking technology enables you to understand the structure and relative amounts of each glycans but you don’t need to prepare glycan only. The Erexim™ is a proprietary technology (patent pending in Japan and patented in the United States and South Korea) co-developed by Shimadzu fundamental technologies laboratories and RIKEN.

Analysis of N-linked glycans are most frequently performed by first detaching the glycan from the protein. Although this approach is accurate in both quantitative and qualitative respects, the result given is an averaged picture of glycans derived from all possible glycoproteins and glycosylation sites. In order to focus on the glycan heterogeneity occurring at a specific glycosylation site of interest, analysis needs to be performed at the glycopeptide level using enzymatic protein digests. However, since glycopeptides have unique masses, data analysis requires labor-intensive informatics and manual data manipulation. Erexim™ Application Suite is designed to facilitate the analysis of site-specific glycan heterogeneity by providing customizable ready-to-use methods and automated data analysis.

When analyzing glycans or glycan-containing molecules by MS/MS, the product ions generated by fragmentation include a high abundance of glycan-derived low m/z ions called the oxonium ions. Although the species and relative abundance of oxonium ions reflect the glycan structure of origin, conventional MS/MS provides insufficient features to differentiate between glycan structures. Energy-resolved oxonium ion monitoring, abbreviated as Erexim™, adds another dimension to MS/MS data by acquiring data at a series of collision energies (CE) of fragmentation. A plot of the change in oxonium ion abundances with respect to CE, the Erexim™ profile, now contains the resolving power to differentiate between similar glycan structures. Erexim™ requires triple quadrupole mass spectrometry for its ultrafast scan speed to acquire a multitude of data points and for its quantitative ability to acquire reproducible profiles. Moreover, one of the product ions targeted in Erexim™ is specific to the N-glycan core structure and is an ideal reporter ion for relative quantitation of glycan structures.

The database of Erexim™ Application Suite contains 45 entries of N-glycan structures. Each entry contains monosaccharide composition, linkage information, amino acid sequence (if glycopeptide) and the reference Erexim™ profile. Entries may be added by customers to keep updated with research progress. 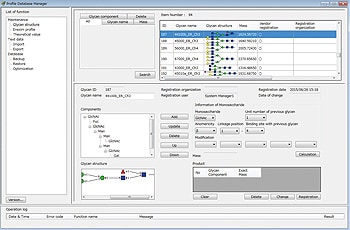 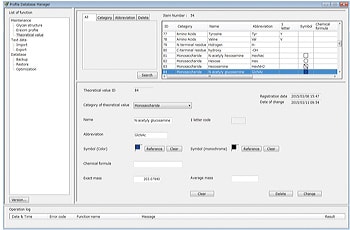 For detailed quantitative analysis, as well as for Erexim™ profile data acquisition, the number of MRM transitions may be hundreds and it is extremely labor-intensive to design them correctly. MRM Method Maker automatically produces MRM transitions according to the selection of glycan structures of interest, peptide sequence, ion adduct type and other inputs. MS acquisition parameters such as CE, dwell time, etc. can also be assigned collectively. 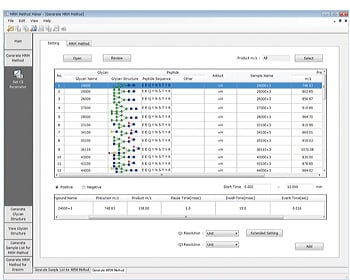 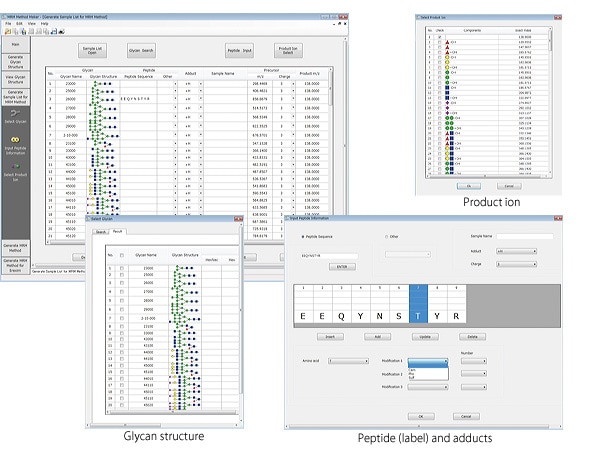 Because glycans and glycopeptides are detected at multiple charge states in LC/MS, their quantitation requires complex data manipulation to correctly combine all ions derived from each molecular species. This process is automated by the Data Analyzer, and the result will be presented graphically, either as a bar chart of relative abundance or as an Erexim™ profile plot.

* Each application is executed from the main page of LabSolutions. 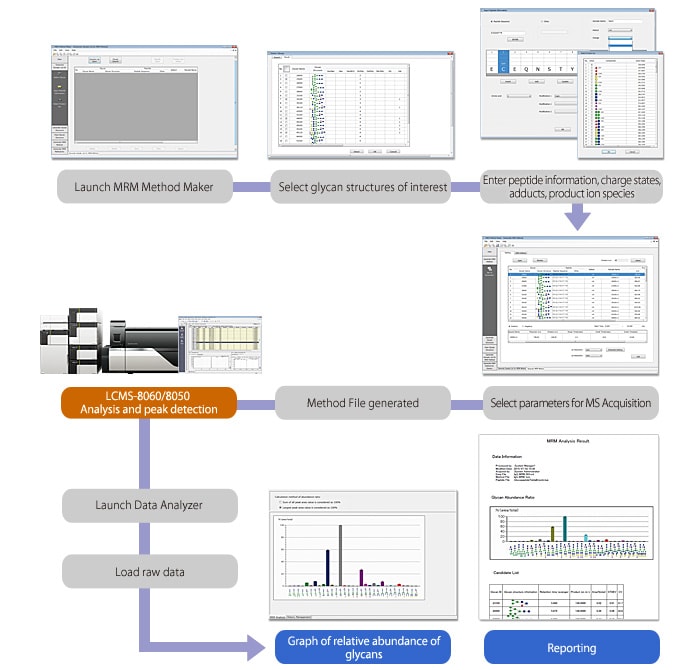 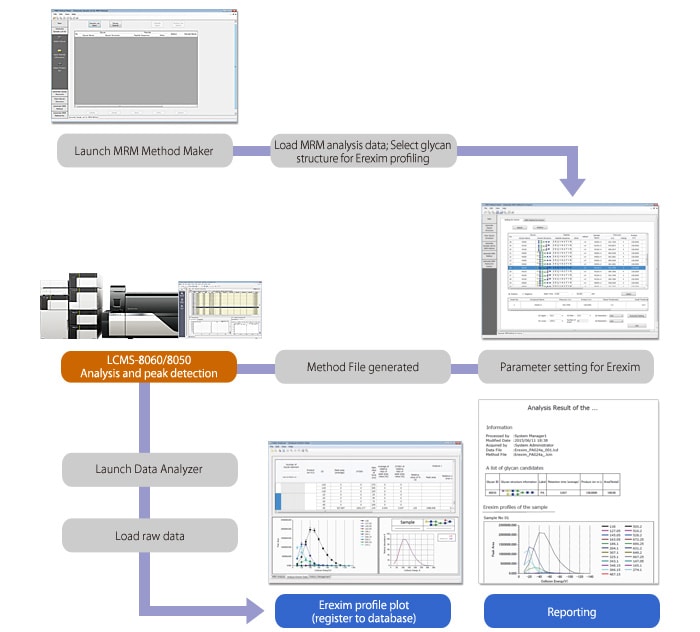 Here we show an example of N-glycan heterogeneity analysis by Erexim™ Application Suite, targeted specifically for the glycosylation site in the Fc region of a commercially available monoclonal antibody. The sample was prepared by digesting the antibody solution (50 μg) with trypsin for 2 hours, then removing hydrophobic peptides and residual trypsin by passing the reaction mixture through a Supel-Select HLB SPE cartridge. The flow-through fraction is rich in Fc region glycopeptides.

(1) Using the MRM Method Maker, glycan structures of interest were selected to generate the list of target glycopeptides.

(3) The MRM transition list generated in step (2) was saved as a method file, which was downloaded to the LCMS-8060 to perform the analysis. Three replicate measurements were performed. 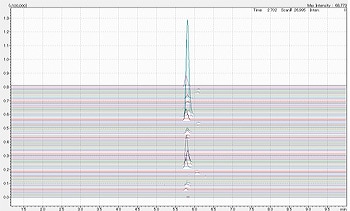 (4) After performing peak integration with LabSolutions, the saved data was loaded into Data Analyzer. The results shown below were automatically generated.

(6) The information generated in Step (5) was saved as the LabSolution Method File, which was downloaded to the LCMS-8060 to perform analysis. Three replicate measurements were performed. 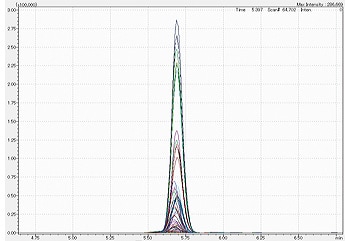 (7) After performing peak integration in LabSolutions, the saved data was loaded into Data Analyzer. The results shown on the right are the Erexim™ profile plots generated.

(8) Referring to the Erexim™ plots registered in the database revealed that the newly acquired data appeared similar to the reference data of the same glycan mass, giving an indication that what was detected from the sample had the same structure as Glycan ID 45100_ER_Ch3. In contrast, the acquired data for Glycan ID 44100 was different from two of the reference profiles having the same glycan masses, 44100a_ER_Ch3 and 44100b_ER_Ch3. The curve for product ionm/z204 in the acquired data fell in between the two reference profiles, providing the researchers important information regarding the composition of the sample.