Milk is secreted from the mammary glands of female mammals and provides essential nutrients, high-quality proteins and fats. Generally, the word “milk” refers to the cow-type, while for other milks, the animal of origin must be defined.
With regards to the lipid matter of milk, it is contained in globules surrounded by a membrane which form an emulsion with the serum. The content of fat varies depending on the animal species, providing that cow, goat, ewe and buffalo milk contain on average 3.9%, 4.5%, 7.2%, and 7.4%, respectively. With regards to the milk lipid composition, triacylglycerols are always predominant, followed by minor components such as diacylglycerols, monoacylglycerols, keto acid glycerides, hydroxy acid glycerides, free fatty acids, phospholipids, and sterols.
As of the unsaponifiable matter of milk lipids, it is formed of sterols (mainly cholesterol, along with small amounts of 7-dehydrocholesterol, lanosterol, dihydrolanosterol), hydrocarbons (alkanes, squalene), vitamins (A, E, D), and alcohols. Among these, the sterol class is extensively investigated for two main reasons: i) the nutritional/health implications of cholesterol, and ii) the detection of vegetable lipids added to cream and butter as tracers.
The present investigation is focused on the elucidation of the entire unsaponifiable fraction (no TLC pre-fractionation was performed) of cow butter, along with buffalo, goat and ewe milks, by using comprehensive 2D GC (GC×GC) with dual mass spectrometry/flame ionization detection (MS/FID). The advantages of the developed GC×GC-MS/FID method, over one-dimensional GC ones, were: i) creation of a two-dimensional “fingerprint” of the entire unsaponifiable fraction; ii) increased sensitivity (detection of minor constituents); iii) greater peak capacity; iv) formation of highly organized analyte patterns, thus providing enhanced identification potential.

All samples (cow butter, cow, goat, ewe and buffalo milk) were purchased from supermarkets and local producers, and stored at -18°C, prior to lipid extraction. The lipid fraction was obtained as follows: 25 mL of milk were treated with 30 mL of a chloroform/methanol (2:1) mixture, in an ice bath, under magnetic stirring, for 30 min. The content was transferred to a separating funnel and agitated for at least 5 min, to allow the breakage of the globule membranes. After centrifugation, the organic (lipid) phases were pooled, dried with anhydrous Na2SO4, filtered, then distilled with a rotating evaporator. The obtained lipid matter was then subjected to mild saponification: 10 mL of a KOH/EtOH 2 N solution was added to the fat and kept overnight, at room temperature and in darkness, under continuous magnetic stirring. After the addition of 10 mL of distilled water, the whole content was extracted with diethyl ether, for three times. The combined ether extracts were washed with distilled water until a neutral pH was reached, dried with anhydrous Na2SO4, filtered and evaporated to dryness. The residue, namely the unsaponifiable fraction, was subjected to a derivatization process (trimethylsilyl derivatives were formed) as follows: the sample was dissolved in chloroform, added with the BSTFA + TMCS reagent (100 μL), in a pyridine environment (100 μL); heating was at 70°C, for 30 min.

The present investigation aimed to create a GC×GC fingerprint of the entire unsaponifiable fraction of various milk lipids. Peak assignment was performed through:i) the use of pure standard compounds, when available;ii) research in the database mass spectra;iii) extensive study of compound (mainly sterols) fragmentation behaviours; iv) chemical class 2D plane locations.
A GC×GC-FID chromatogram expansion, relative to the buffalo milk, is illustrated in Figure 1.
As can been seen, a series of chemical classes were identified: hydrocarbons (linear alkanes; squalene), TMS-derivatized fatty alcohols, TMS-derivatized monoalkylglycerols, TMS-derivatized tocopherols, TMS-derivatized sterols. Specifically, linear alkanes are nicely aligned along a diagonal in the C17-33 range, with squalene being the most abundant constituent. Eight even-numbered fatty alcohols, from C14 to C28, are situated along a line just below the linear alkanes. Phytol (3,7,11,15-tetramethyl-2-hexadecen-1-ol), a derivative of chlorophyll, is also present. Presumably, the linear alcohols underwent a single wrap-around. As of monoalkylglycerols, five saturated analytes, along with two mono-unsaturated, were identified in the C14-18 range, again positioned along a diagonal, slightly below the fatty alcohol line. A single vitamin (E), namely α-tocopherol, was identified. With regards to the sterol class, overall, 10 naturally-occurring sterols were identified and accompanied by relative % information (Table 1). Cholesterol is the most abundant constituent (90.6%) of the entire sterol fraction. Lanosterol, lathosterol, 7-dehydrocholesterol, along with the low-concentration sterols, i.e., coprostanol, desmosterol, 14-desmethyl lanosterol, are well-known precursors of cholesterol. A single product of dehydration of cholesterol, namely cholesta-3,5-diene, was identified and not quantified because not considered part of the naturally-occurring sterols. 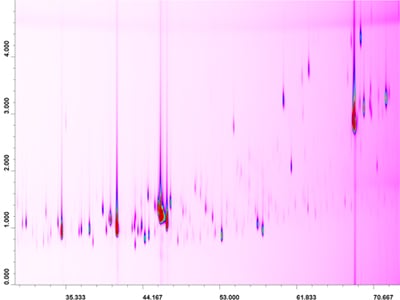 Figure 1. GC×GC-FID fingerprint relative to the analysis of the unsaponifiable fraction of buffalo milk fat.

With regards to other milks, the entire unsaponifiable fraction presented no great qualitative differences with respect to the buffalo milk, apart from different quantitative profiles, however (Table 1). Figure 2 illustrates the expansion on the vitamin and sterols region of the GC×GC-FID chromatogram of the unsaponifiable fraction of goat milk fat. With respect to buffalo milk, an additional vitamin, specifically γ-tocopherol, was identified. Again ten sterols were detected, even though coprostanol was not detected, and ergosterol, or provitamin D2, was identified through an MS database similarity of 88%. With regards to quantitative data, apart from a slightly higher (about 3.5 %) amount of cholesterol with respect to buffalo milk, the major differences were found for minor constituents (campesterol, 24-methylene cholesterol, desmosterol, 14-desmethyl lanosterol). The same statement is also valid for the other milk samples. Figure 2. Expansion of the GC×GC-FID chromatogram relative to the analysis of the unsaponifiable fraction of goat milk fat.