Shimadzu's Response to the Earthquake Disaster

Due to electrical power shortages resulting from the shutdown of nuclear power plants in the wake of the Great East Japan Earthquake, electrical power restrictions were implemented throughout Japan last summer. The persons in charge of responding to the restrictions at Shimadzu's production facilities reviewed the experience below. 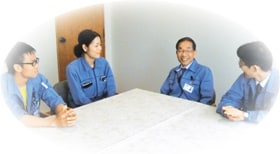 Last year must have been a truly difficult year. What was it like for all of you?

Matsuda("M" below): Since I had formerly worked at the Sanjo Works plant, where the headquarters is located, I was already well aware of its facilities. However, I didn't have enough knowledge about the plants and offices in other regions subject to the power restrictions in the Japanese Electricity Business Act. Therefore, I first had to scramble to assess the current situation.

Uehara("U" below): It was an extremely hectic period that seemed to suddenly start and then suddenly stop. As the power reduction planning task force, Mr. Matsuda and I started planning at the end of May and within a very short period we had identified what needed to be prepared. We worked on much of what had to be done.

Sagane("S" below): To be honest, after the earthquake, we did not think the power restrictions would extend to the Kansai area. However, because the Aircraft Equipment Division had many power intensive instruments used in R&D testing and production, we warned the division general manager that even more severe power restrictions than the current 5 % target might be imposed.

Osanai("O" below): Long before there was talk of nation-wide power restrictions, Hadano Works was already facing a crisis situation with gasoline and supply shortages starting the Monday after the March 11 earthquake and planned power outages announced by the power company

How did Hadano Works handle the planned outage?

O:The first planned outage occurred from 4:30 to 10:00 PM on March 16, within the first week after the disaster. Power was supposed to be restored after 10:00 PM that night, but even though the surrounding areas started lighting up, Hadano Works remained dark. At first we did not know what had happened, but realized later that the power must be restored by switching ON the circuit breaker for the electrical equipment manually. After reviewing the drawings using only flashlights in the cold night and eventually restoring the switch settings on the substation control panel, it was already the next day before we reached our homes. The fact that we had never experienced an extended power interruption before made things even more difficult, and it was a struggle to handle even blackouts during the day. We urgently made some modifications to the power distribution panel so that we could use an emergency power generator as a general power supply as well, but power interruptions occurred repeatedly. This is because two different circuits operated alternately to activate the generator when a power interruption was detected and to shut off the generator when the power supply was determined to have been restored due to the resulting electricity. By the time we finally resolved that issue, they stopped having planned outage (laughs).

M:At the time, we tried to order a generator from Sanjo Works, but we did not receive it for a long time. Eventually, we were able to order one just in time for the power restrictions anticipated for the peak summer period. Since summer-time power restrictions were imposed in the Kansai region as well, we installed a generator at Seta Works in Shiga prefecture. As a result, our power usage decreased, but our carbon dioxide emissions increased slightly, due to the use of diesel fuel.

With so many different issues to address, what sort of power reduction measures did you implement?

U:First we prepared a form for assessing the current situation at all Shimadzu Group sites, including affiliated companies, and requested their support in drafting a power reduction plan. We also performed preliminary calculations, and so on, regarding the effectiveness of various energy saving measures.

M:This form was also intended for calculating the effectiveness of power reductions, and it allowed calculating numerical targets, rather than merely providing theory. That was the point when we starting forming a solid plan. However, then a similar form was issued by the government (laughs). Measures at our offices in Eastern Japan involved people that were not normally experienced in reducing energy consumption, so we modified the form so that other general administrative personnel could understand it as well. In specific terms, measures included introducing LED task lighting for offices and reevaluating the ventilation of the air conditioning system. In addition, other measures that were already being prepared as energy saving measures were extremely helpful as well, such as introducing specific air conditioning equipment.

S:Our department has ten pieces of equipment that use large compressors, with some of the compressors consuming 1,000 kW of power each. These pieces of equipment are used for R&D testing, so they are not constantly in use, but even a single piece of such equipment is power-consuming enough to add about 10 percent to the entire electrical power usage for the entire Sanjo Works plant. In reality, we compensated by rescheduling development plans so they occurred before the summer peak and substituting production equipment that consumes less power. Initially, we thought we could minimize effects by operating the equipment in the evening, but in reality that was rarely done.

O:In addition to the emergency measures we just mentioned, we also tried to obtain UPS (uninterruptible power supply) systems as a way to maintain communications, such as for computers and telephones. However, available UPS systems only provided a short battery backup time, so we modified the UPS systems to extend the backup time by installing automotive batteries purchased at a home center. In addition, the Semiconductor Equipment Division manufactures solar cell anti-reflective layer deposition systems at the Hadano Works plant, which consumes an extremely large amount of electricity. Performing tests using two systems at the same time increased the overall power consumption of Hadano Works by 20 %. Therefore, that operation was shifted to evenings after 6 PM and Saturdays to significantly reduce peak power consumption. The air conditioning and lighting efficiency was improved by gathering all the office areas in one location. We also made quite a few modifications to equipment to improve its energy efficiency as well. 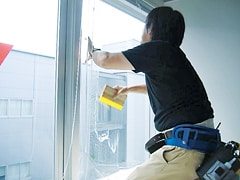 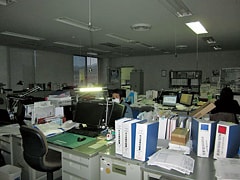 Do you think these events have changed the company in any way?

S:Though it was not as effective as the production equipment measures mentioned earlier, installing 470 LED task lights in the office areas improved the awareness level of employees. Employees are now more careful about switching OFF the power supply to lights and equipment, which has reduced power consumption in the office areas by about 10 to 20 %. There are also more people actively reducing energy consumption in the production areas as well. There have also been many suggestions from the machining areas, such as ways to improve how the machining equipment is operated. In other words, the experts from each workplace brainstormed to come up with various ideas. I think that with the damage from the earthquake and tsunami so visible everywhere, this past year has been a year where employees are self-motivated to look for ways to help.

U:From the perspective of the task force, I am sure that having the respective departments submit various reports and collect information caused them a lot of extra work. However, none of the departments complained and they seemed to be extremely cooperative.

O:It was the same at Hadano Works as well. Shifting the equipment operating times required some people to shift their work schedules, but everyone was very cooperative. During the power cutbacks, the hallways were dark and elevators could only be used for customers, but no one complained.

M:On the other hand, some things required more mindfulness on our part. For example, some departments did not know that air conditioners at Shimadzu were supposed to be set to 28 degrees during the summer. The temperature setting should be determined based on specific workplace circumstances as well, of course, but we became acutely aware how inadequately this requirement had been communicated.

Strict power restrictions and planned power outages are expected in the Kansai region again this summer.

M:It is important that measures to reduce power consumption are securely established before such power restrictions occur. Also, there is a limit to how much power consumption can be reduced through such measures. Simply shifting the usage time period is not enough, so we must first reduce our fixed electricity usage levels. In some cases, leakage from compressed air lines can cause a direct waste of money and energy, so we need to carefully check for things like that.

O:We spent a lot of time checking for leakage in compressed air lines at Hadano Works, and it resulted in significant improvement. On the other hand, we still have some room to improve in production areas, where equipment is constantly running or the power left ON, and to enhance the thermal insulation of the buildings.

S:Last year, the power outages almost stopped the production equipment at our affiliated factories in the Kanto region. If that had occurred, it would have stopped the supply of parts, which could have prevented us from supplying products to customers that were victims of the earthquake disaster. That would have been an extremely large problem, so we were forced to implement all sorts of measures to make sure that did not occur, such as by sending generators to applicable affiliate factories and reassigning orders to factories in other regions. Additional supply chain measures are expected to be required in the future as well.

Thank you so much for talking with us today.