Automobiles have taken root as people's means of transportation. The number of automobiles is ever increasing, mainly in emerging countries, and some predict that this will more than double the current number to reach 165 million vehicles in 2030. Currently, the energy for mobility such as automobiles comes mainly from fossil fuels, and thus, efforts are being made toward efficient use of these resources, while the development of new energy sources is continuing. Shimadzu provides new measuring devices used for the development of environmentally friendly mobility, supporting the growth of technological innovations toward a low-carbon society. 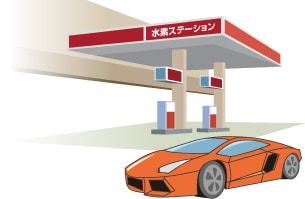 As an example of automotive and other mobility related trends, in recent years, international fuel consumption regulations and exhaust gas regulations have both been strengthened. This is intended to further improve automotive and other internal combustion engines, not just so that they operate efficiently on less fuel, but also to make the exhaust as clean as possible by improving fuel efficiency, as the achievement of better environmental performance becomes urgent business. At Shimadzu Corporation, in response to the needs of automotive manufacturers, we provide products that contribute to new technological developments, rendering the condition of internal combustion engines visible so as to assess phenomena and issues. The ExDOP®, an optical probe that won the "CHO" MONODZUKURI Innovative Parts and Components Award in 2014, is capable of directly assessing the state of luminescence during combustion within an engine. By analyzing in detail the light within an engine as detected with this instrument, it becomes possible to clarify a variety of phenomena seen during engine operation. As one example, by assessing whether excessive fuel consumption occurs when the engine starts up, clues are obtained about how to improve fuel efficiency. At the same time, EGR-Chaser, a quick responding gas monitor released in 2015, can monitor the concentration of carbon dioxide and oxygen, which are directly involved when gasoline and other fossil fuels are burned in order to run an engine, during the process of automotive engine development. In engine development, it is essential to assess quickly and with high accuracy the state at the intake where fuel and oxygen are blown in, so as to improve the control methods in order to provide better fuel efficiency as a result.

Towards the Realization of a Hydrogen Society

One of the big trends revolving around future mobility is the progress in research and development and the advances in infrastructure towards a hydrogen society based on fuel cells. Using the principle of reverse reaction of electrolysis of water, fuel cells generate energy from oxygen and hydrogen while only producing water as a byproduct. To spread this clean technology, Japan's Ministry of Economy, Trade and Industry released the "Strategic Road Map for Hydrogen and Fuel Cells," aiming to set up about 320 hydrogen stations nationwide by 2025 and increase the number of fuel cell vehicles to about 800,000 units in total by 2030. The crucial element in research and development toward the spread of fuel cells is monitoring of the status of oxygen, the fuel of fuel cells. Through monitoring, it should be confirmed that the reactions taking place inside a fuel cell are smooth, and any problem or room for performance improvement should be identified, which will allow research and development for the optimization of power generation conditions. In 2009, Shimadzu released the world's first fuel cell oxygen concentration visualization equipment "FC-O2 Monitor" based on the results of a project by the New Energy and Industrial Technology Development Organization (NEDO), in which Shimadzu participated from 2005 to 2007. Moreover, we joined a program by the Japan Science and Technology Agency (JST), with the University of Yamanashi as project leader, through which the "FC-3D Monitor" was newly developed and commercialized in 2016. The equipment can investigate the oxygen concentration inside a fuel cell in more detail and in real time, making it possible to design and select materials that enhance the power generation efficiency of a fuel cell, and examine optimizing the passage of oxygen and hydrogen. 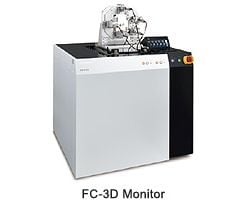 Voice of a Developer

In recent years, there has been a sharp increase in requirements with respect to engine control. Aiming for further increases in fuel efficiency and exhaust gas performance as well as improved engine output has become essential. Currently, our challenge is to further advance the technology in instruments already being sold, and now to develop new products that can monitor the state of combustion within engines using a variety of methods. Our goal is to use the technology that Shimadzu has cultivated to date to contribute to the development of engines with better than ever environmental performance.

Fuel cell vehicles are the "ultimate eco-cars," emitting no carbon dioxide, and there are high expectations of them, not only from Japan but from around the world, as many different methods are available for the generation of hydrogen as an energy source. It is said that these vehicles will be actively used as a means of transporting spectators during the Tokyo Olympics to be held in 2020, and we expect to see a further acceleration in the spread of their use. Shimadzu has played a leading role in the area of measuring techniques for fuel cell development in cooperation with industry, government and the local community. We will continue our great contribution towards the realization of a hydrogen society as quickly as possible.