People's anxiety about radioactivity as a result of the Great East Japan Earthquake had adversely affected agriculture in Fukushima Prefecture directly and indirectly. In order to deal with this problem, Shimadzu developed the FOODSEYE Food Radioactivity Inspection System using all of its technological capabilities. One of our employees that participated in the FOODSEYE development project summarized the history of its development and his thoughts about it. 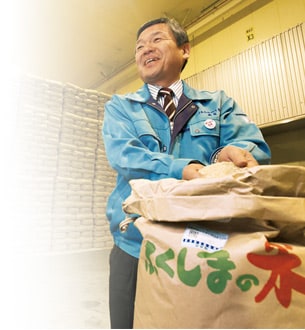 On March 18, 2011, a week after the Great East Japan Earthquake, I left Shimadzu Sanjo Works and got on a bus heading north along the Tohoku expressway to visit the Tohoku Branch. On the damaged expressway, I saw vehicles of the Self-Defense Forces and the Tokyo Fire Department as well as police cars and materials delivery vehicles all hurrying toward the disaster area. At the time, firefighters and Self-Defense Forces personnel were at the Fukushima Daiichi Nuclear Power Station, where the hydrogen explosion had occurred, trying hard to cool down the nuclear reactors and spent nuclear fuel storage pools. Employees at the Tohoku Branch were bravely facing this difficult time, which was encouraging for us. However, seeing a circle drawn on a map of the Tohoku area with a 100 km radius from the Fukushima nuclear plant weighed heavily on my heart.

Even though the staff members seemed to be acting normally, the extreme crisis of radioactivity was heavily clouding their lives. As you know, the Fukushima Daiichi Nuclear Power Station did not experience a worst-case scenario. However, it was only the beginning of the battle against radioactivity for people in the Tohoku area, especially for people in Fukushima. At that time, I did not expect that I would be part of the battle in Fukushima at all. 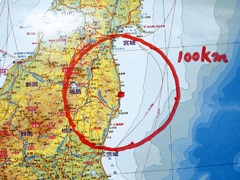 Map of Southern Tohoku area posted in the Tohoku Branch

Starting the Development of a System in the Dark

Radioactive cesium released from the Fukushima Daiichi Nuclear Power Station spread mainly in the eastern half of Fukushima and contaminated the soil. Consumers nationwide became anxious about rice and all types of food grown in Fukushima and began to stop buying them. Farmers there were completely helpless to do anything and were mentally worn out. To deal with the situation, the Japanese government discussed the necessity of radioactivity inspection of foods. Because people were aware that we develop and sell analytical instruments, their expectations for us to develop such instruments became greater day by day.

To meet these expectations, we started to develop a food radioactivity inspection system in October 2011 under the direction of Mr. Suzuki, Managing Director of Shimadzu Corporation. He declared that Shimadzu would complete a test model by the end of the year and conduct a verification test in Fukushima in February. We had only three months to develop a system that would satisfy some very demanding conditions. The system needed to have the capability of measuring rice in 30 kg bags without taking it out. Quick and easy high-accuracy measurement, even with high background noise (radioactivity from materials other than the measurement targets) was essential. The system also needed to satisfy the performance specifications determined by law. We also wanted to develop a system that would at least cover its own costs from a viewpoint of business. Since we manufacture positron emission tomography (PET) systems capable of looking for cancer by detecting radioactivity generated from radioactive diagnostic agents administered to patients, we have advanced technology to detect radioactivity. Our engineers started a technical examination in August and decided to use the radioactivity measurement technology of PET to test rice for radiation. 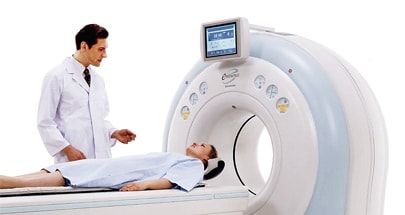 However, there were so many problems to solve. We did not know if accurate measurement was possible for the standard value for detecting radioactivity, which is 1/60,000 or less of the amount detected by PET (radioactive cesium of 100 Bq/kg or less). Even though measurement was theoretically possible, we were not sure if we could actually manufacture such an instrument. The measurement target was rice, which we had never handled before. We did not know the radiation dose at the installation site or the influence of radioactivity either. We needed to think about an adequate thickness for the lead of the shielding part. The system needed to have a processing capacity to test a huge amount of rice. We did not know if we could obtain an adequate volume of parts and components necessary for the production of the system in such a short time even if these hurdles were all cleared. We literally started the project in the dark.

Development, Product Shipment, and Inspection of All Rice in All Bags as Planned

This project was pushed forward rapidly by many development-related departments, mainly by the Medical Systems Division, which is in charge of the development and selling of PET systems, and the Technology Research Laboratory. All the members involved worked diligently on this project finding spare time and extra energy from their everyday work and many of them made this project their first priority. Many other employees also contacted us asking if they could be of any help. With the positive response and support of so many employees, the project was completed on schedule with the first test product being completed at the end of December 2011, just as declared at the start of the project. The product was named "FOODSEYE," which means an eye for watching foods. 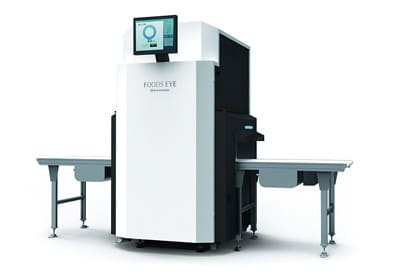 For the verification test of the system, we borrowed a rice storage facility in Nihonmatsu City, Fukushima from the Michinoku Adachi Japan Agricultural Co-operatives (JA Michinoku Adachi). We could not have developed the FOODSEYE system without the extensive cooperation of people from JA Michinoku Adachi. Special thanks are due to Mr. Bunsaku Takamiya, Executive Director at the time, for teaching the totally inexperienced Shimadzu development staff members about field research, actual situations of rice farmers, and activities carried out by the Fukushima prefectural government, each municipal government, and JA. I feel that this system development project surely contributed to the agriculture industry of Fukushima. Staff members involved in the development, selling, installation, and follow-up services must have felt a great sense of achievement, which was only natural for them. As a result of the project, we had an opportunity to build a strong relationship with JA Michinoku Adachi. I feel we were able to establish this relationship because we believed it had been achieved by following Shimadzu's corporate philosophy "Contributing to Society through Science and Technology" through development of the FOODSEYE. However, I wonder if it was really testing equipment like FOODSEYE that saved the agriculture industry in Fukushima. I heard that Executive Director Takamiya first thought that testing all rice in all bags would be physically impossible. He also could not believe that farmers, who were the victims, would have to conduct the testing on their own products. With these feelings in mind, he provided significant cooperation for the development of the FOODSEYE system. As a result, 13 FOODSEYE units operate in JA Michinoku Adachi. I heard that rice produced in 2012 had been inspected and shipped smoothly. 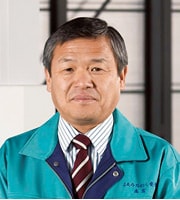 Executive Director Takamiya spoke of the battle against cesium: "Rice has been Japanese people's staple food since ancient times. It has been said that people are only able to eat rice after 88 painstaking processes have been accomplished starting with tilling of the soil. This explains why the Chinese character for 'rice' is comprised of characters meaning eight, ten, and eight. Over ten more processes were added to grow rice produced in Fukushima this year (especially in areas where cropping was restricted). Therefore, Fukushima rice should be expressed by a Chinese character comprised of characters meaning nine, ten, and eight." These additional processes include prior soil survey, dose survey, as well as all the processes for minimizing the amount of cesium taken into rice. As one of the 98 processes, FOODSEYE clearly showed that all of this additional work and effort was worth it. Although there is no doubt that this process was extremely important, what really saved Fukushima rice was the heart of farmers who cherished the land they inherited from their ancestors and their hard work and effort to continue producing rice with pride, even with the additional burden of carrying out processes they should not be responsible for. 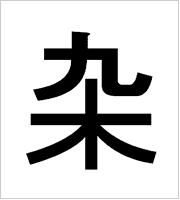 By this September, I believe we will see golden rice fields in many places in Fukushima again. However, farmers in Fukushima are still fighting an uphill battle. The time when people can once again see rice fields in Fukushima with total conviction that they are safe (I am not sure I should say this as a person from an equipment manufacturer) would be when the FOODSEYE has fulfilled its mission and been disposed of.

An event named "Michinoku Fair" was held in the dining room of Shimadzu Sanjo Works in October and November 2012. We purchased rice from JA Michinoku Adachi and served local dishes of the Tohoku area (e.g. rice with deep fried pork cutlet on it with a sauce called "sauce katsudon" and rice kneaded onto skewers and then baked called "kiritanpo-nabe"). In December 2012, a spot sale of rice and vegetables supplied by JA Michinoku Adachi was held, where many employees lined up for freshly-made rice cakes made of sticky rice. 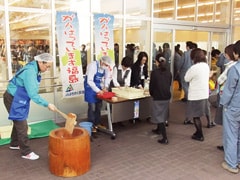